Heritage for health and wellbeing

Find out about the 12 funded community projects

The Heritage Wellbeing Fund projects will reach and involve a large cross-section of people in Brent and help improve health and wellbeing through engaging with heritage. Brent Museum and Archives will work with the awardees to increase the visibility of Brent’s history, ensuring more people will be involved in heritage and have a greater sense of wellbeing.

Keep an eye on this page for updates, and make sure to follow the groups on social media to find out how you can get involved. 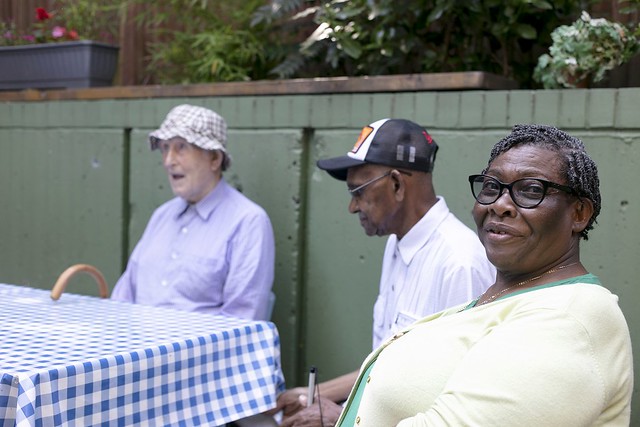 Shared Memories of Immigration will capture and celebrate the history, heritage and experience of Brent’s Irish and West Indian immigrant communities by recording the memories of their elderly members. A resulting film will explore how the two communities have supported each other and contributed to Brent’s culture and history, and will be a valuable resource that can be used in dementia cafes. The project will create opportunities for shared learning between the elders in these communities and the wider Brent population working with partners such as the Irish World newspaper and a historian from the West Indian community to ensure full participation in the project.

The Gaderbrook project will restore the Gaderbrook stream in Fryent Country Park, its main catchment ditch and surface water source, to a near natural state. Fryent Country Park has provided a restorative green space for the residents of Brent throughout a difficult twelve months. The project is for both working participants and visitors. It aims to involve members of the community in practical enjoyable work outdoors that will improve the wetland and wildlife value of the Gaderbrook and its main tributary.

The Flying From Brent project will celebrate the notable aviator Amy Johnson, telling her story through an assembly performance for school pupils delivered by an actor playing Johnson, followed by creative writing workshops. A video recording of the performance will be created and shared. The project will also include a walking tour for adults focusing on notable places in Kingsbury related to the aviator’s life.

The Paddington Old Cemetery Heritage Trail will highlight the history and stories of the diverse range of people buried at the cemetery. It will include information boards, leaflets, and a downloadable audio description and trail guide. Alongside the good, great and bad, are memorials to local people and others from across the world. They include scientists, early sports stars, an infant Indian princess, explorers, Empire and military officials, many war dead, an infamous fraudster, a famous courtesan, missionaries, artists, composers, a Prime Minister’s sister, a pioneer of women’s trade unions, and Paddington Bear's creator, Michael Bond.

Learn more of Brent’s juicy historical secrets with Local History Walks! Friendly in-person guided tours, fun do-it-yourself downloadable history trails and inspiring how-to workshops will show you how to step into the stories behind Willesden's busy high road, the quiet recreational spaces of Queen’s Park and the rural idyll of the Welsh Harp. Free activities for all ages throughout the year will encourage local residents to get everyone out and inspired about the area around us.

The GRoe Green project is a participatory gardening project that will focus on the importance of the heritage of natural habitats. Children from Roe Green Primary School, Kingsbury, will create a garden in an unused, overgrown area within the school grounds. Taking inspiration from the local, award-winning Barn Hill Conservation Group, the children will create a vegetable patch, plant flowers that bring wildlife back to the area and sow wildflowers that previously existed in the local grasslands in order to restore the biodiversity to what it once was.

Mahogany Carnival Design – Wonders of Carnival:Through the eyes of our carnivalists

The Wonders of Carnival project will work with young people on archiving Mahogany’s carnival collection, learning traditional carnival skills, improving access to the studio, and devising interactive talks. The project aims to shine a light on the contributions and lives of Brent’s black community, inspiring the next generation of creatives.

Preston Community Library – We Are Preston! Voices from Metroland

We are Preston! will explore the built heritage and the local environment of Preston, expanding awareness of our local history through looking at the buildings we pass every day. The project will collect memories from long-established residents and share them with the younger generation. The project will also produce a photographic record of buildings and open spaces in the area, resulting in an exhibition with an introduction for schools and interpretive performance.

The Reaching Out project will develop drama workshops for adults with learning disabilities and/or autism to explore the heritage of Brent’s parks using different art forms. Participants will create a series of responses inspired by this heritage. Park visitors will thereafter be able to interact with these creations, which will be displayed in the parks through QR codes on posters. Visitors will be encouraged by the group to look at the parks in a new way, and reflect on their personal relationships with Brent’s green spaces.

The Reflections on the Past, Present and Future project will be about the people who feature in the photographs in Roy Mehta’s recently published photobook about life in Brent, REVIVAL, LONDON 1989-1993. He will be following up on the lives of some of the people whom he photographed thirty years ago and re-photograph them in similar locations. Roy will also make a short film so that we can hear their experiences of living in the borough.There will be an exhibition of his documentary work made in Brent back in 1989, opening in The Exhibition Space at The Library at Willesden Green in March 2022.

The Brent Black Musical Co-Op Heritage Project celebrates the contribution the iconic BBMC building has made to Brent’s community for over 35 years. The project will invite BBMC members and Brent residents to contribute their memories and recreate music to return community cohesion and promote wellbeing.

By the Cut of Their Cloth is a collaborative project between Brent artist Warren Reilly and The Mixed Museum that will explore Brent’s rich multiracial and mixed-race history. The project will conduct an open call to the local community for personal photographs that will encourage residents to explore and celebrate Brent’s and their own multicultural and mixed race past. Practical workshops in visual research, photography, illustration and image making will uncover family histories and contribute to existing archive collections, for future generations to study and enjoy.

The Heritage Wellbeing Fund is part of Being Brent – Heritage for Health and Wellbeing, a project funded by the National Lottery Heritage Fund and delivered by Brent Museum and Archives.

The community groups, non-profit organisations, charities and individuals from Brent have been awarded £5,000 each to conduct their project between August 2021 and March 2022.