History of Cricklewood and Dollis Hill

Cricklewood is on the eastern border of Brent. Dollis Hill is a significant geographical feature between Cricklewood and Neasden.

Cricklewood means ‘wood with an uneven outline’. Recent excavations on Dollis Hill show settlements date back to the Early Iron Age. They have also uncovered a Late Roman building, possibly connected with the Late Roman villa that appears to have existed in Kingsbury. The Edgware Road, which runs through Brent, is a Roman road, an important route into London for centuries.

In 1294, there was a small settlement on Edgware Road at ‘le Crickeldwode’. A larger settlement existed at Oxgate to the northwest. Childs Hill (named after 14th century inhabitant called Richard Child), and Dollis Hill (named after someone called Dolley or Dawley) are both first recorded as settlements in the late 16th century.

Flick through this album of old photos of Church End from the Brent Museum and Archives collection: 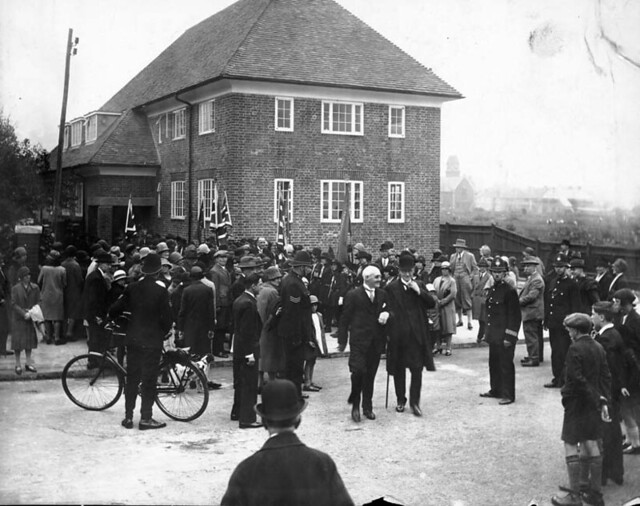 There were several farms in the area by the 18th century. In 1754, Cricklewood and Childs Hill were both hamlets, with Childs Hill significantly larger. Most of the dwellings at Cricklewood were on the Hendon side of Edgware Road. By 1792, there were some new cottages at Dollis Hill. Cricklewood was divided between the parishes of Willesden and Hendon.

There was little development before enclosure in 1823 (which allowed farmers to fence off farms and claim common land). In 1815, wasteland along Edgware Road was sold as ‘suitable for building’ and several houses had been built there by the early 1850s.

In 1845, Cricklewood was ‘a village one mile in length, consisting of only a few dwellings chiefly occupied by tradesmen of the metropolis ... At the northern extremity some detached residences are being erected which will much improve and benefit the place’.

Overall, Cricklewood did not benefit from its position on the important Roman road, Edgware Road. Several streams ran across the road, one feeding a horse pond opposite the Crown pub. As a result, as late as 1798, the road was famous for ‘mud four inches deep after rain in summer, and nine inches deep in winter’. It was also notorious for highway robberies.

In 1845, coaches from Elstree, Watford and St Albans stopped at the Crown pub. These services did little to encourage development, and Cricklewood was still a ‘pretty rural tract’ in 1876. The Crown, first recorded in 1751, was ‘an ivy clad house with pretty tea-gardens and a skittle alley’. Less idyllic were the bare-knuckle prize fights that took place in nearby fields.

In 1867, the Midland Railway line was built just east of Edgware Road and, in 1870, Childs Hill Station (now Cricklewood Station) followed. The station was named Childs Hill because it was closer to Hampstead than Cricklewood.

The Midland Railway company built extensive marshalling yards north of the station and rows of terraces to house railway workers. The Midland & South Western Junction Railway, a loop line to Acton, was built at the same time, and from 1875 carried passengers from Childs Hill. These passenger services were never a success, and finally stopped in 1902.

By 1875, there were 36 houses in the Willesden part of Cricklewood, including the Windmill inn. Although Childs Hill Station encouraged some construction, Midland Railway local passenger services were infrequent.

By 1900, it was impossible not to notice ‘the great improvements that have taken place in the Cricklewood portion [of Willesden]’. Cricklewood was now a recognisable district, with churches, chapels and a school. In the 1890s, some shops were built in Hendon parish, while the Crown pub was rebuilt in 1889. Then, between 1910 and 1914, a ‘metropolitan electric’ style shopping parade was constructed, along both sides of Edgware Road. The town got its own newspaper in 1900. The 1914-15 Ordnance Survey map shows a ‘picture palace’ and a skating rink on Edgware Road.

In 1912, the Diocese of Westminster built St Andrew’s Hospital on the Dollis Hill ridge. In 1914, it became a military hospital. Some of its earliest patients were Belgian soldiers.

Watch this video showing how Cricklewood and Dollis Hill has changed over time:

Dollis Hill House dated from 1825 and had been the home of Lord and Lady Aberdeen in the late 19th century. Sir William Gladstone, former Liberal Prime Minister (served for 12 years between 1882 and 1894), had stayed there as their guest and loved it so much that the park was named in his memory.

Mark Twain, the American novelist best known for his Tom Sawyer and Huckleberry Finn books, stayed at Dollis Hill House in the summer of 1900. He later wrote, 'Dollis Hill comes nearer to being a paradise than any other home I ever occupied'.

As Cricklewood grew, bus services improved. The London General Omnibus Company (LGOC) opened stables south of Lichfield Road in 1899. This bus depot moved to its present location by 1914. By 1900, there was a bus ‘every few minutes’ from the Crown pub to Charing Cross and two an hour to Hendon. All LGOC buses were motorised by 1911.

In 1904, trams began running from Edgware to Cricklewood. However, due to opposition from Willesden Council, passengers could not continue to London. After the First World War, trams also began running along Walm Lane to Willesden. The trams were converted to trolleybuses in 1936.

The years before the First World War saw a slump in the building trade. In 1914, the northern and Hendon portions of Cricklewood were less built up than the western part.

After the war, building resumed on the All Souls’ estate. Houses and flats were built at Oxgate and Dollis Hill in the 1920s and 1930s. Bus services running between Neasden and north Cricklewood were introduced to serve them.

Early industry in Cricklewood had included a windmill, built between 1784 and 1798, and a chair maker. George Furness built the first factory in the area, manufacturing photographic plates. The presence of the Midland Railway did not however really stimulate industry until after 1900. By 1911, the Phoenix Telephone Company was in Cricklewood Lane, and Smith’s Crisps started in garages behind the Crown in 1912. In the same year, Handley Page set up an aircraft factory on Cricklewood Lane.

The First World War stimulated industry in Cricklewood. Handley Page expanded considerably, and the French aircraft companies Caudron and Nieuport both had factories in the area.

In 1916, the School of Mechanical Warfare was set up in the fields between Dollis Hill Lane and Oxgate Lane as a training area for tanks. Amphibious tanks (that can travel on land and water) were tested in the Welsh Harp Reservoir.

In the previous year, Smith’s Industries had opened a factory on the Edgware Road. By 1920, they had moved their headquarters to Cricklewood and were employing 1,000 people. Famous as makers of electric clocks (‘Cricklewood clocks rank in fame with Devonshire cider’) they would become the town’s largest employer, with a workforce of 8,000 by 1939.

After the First World War, industry moved into areas used for munitions factories. The construction of the North Circular Road in the 1920s made the area even more desirable.

In 1925, mattress makers Staples & Co. opened at the junction of the North Circular Road and Edgware Road. By 1929, 57 factories were situated at what became known as Staples Corner.

Many firms came to Cricklewood from more central locations, for example Bentley, which moved from near Dorset Square, and Rolls Razor, which came from Battersea in around 1927. Associated Automation in Dollis Hill Lane made the General Post Office’s (GPO) coin operated telephones from 1928 to 1982.

By 1939, north Cricklewood was effectively an industrial estate, with factories all the way to Burnt Oak. The motor industry was particularly prominent, and there was even a film studio in Temple Road.

In 1933, the GPO Research Station was built at Dollis Hill. In the late 1930s, in response to the approaching threat of the Second World War, the government built an underground citadel for the War Cabinet in the GPO Research Station’s grounds, but it was hardly used. More notably, the components of Colossus, arguably the world’s first electronic computer, were made at the Research Station before being sent to the codebreaking centre at Bletchley Park, Buckinghamshire. The Research Station closed at the end of the 1970s, and the site was repurposed for industry and, later, housing.

In 1949, Cricklewood had a population of 19,586, and a good shopping centre that attracted many shoppers from outside the area.

Watch this video of a talk by Malcolm Barres-Baker on the history of Cricklewood:

In the late 19th century, many Jewish people moved to Cricklewood from nearby Brondesbury, and three synagogues had opened in Cricklewood by 1934.

In the 1930s, refugees fleeing Nazi persecution came to the area, especially Dollis Hill. The modern Dollis Hill Synagogue was built in 1938, but closed in 1996, when the Grade II-listed building was repurposed for the Torah Temimah Primary School.

After the war, many Jewish people moved further out, to Harrow or Northwood.

Irish people had been coming to the area as seasonal agricultural labourers since at least the early 19th century. After the Second World War, Irish immigration to Cricklewood increased. Irish people came over partly because of unemployment in Ireland and labour shortages in England. Some moved to Cricklewood from overcrowded Kilburn.

Many Irish women became nurses, domestic staff, bus conductors, or worked in light industry. Irish men tended to work in construction, rebuilding blitzed properties and redeveloping slums. A virtual labour exchange operated outside the Crown pub in the early morning, with rows of lorries waiting to transport hundreds of labourers as far afield as Oxford. Similar scenes can be seen in the early morning today.

The Irish labourers sang a song that ended with the lines:

‘Yes, take him down to Cricklewood to mortar, bricks and lime,And let him rot in Cricklewood until he serves his time.’

On Friday and Saturday nights these new residents, most of whom were young and single, would visit Irish venues like the Galtymore dance hall.

From the 1950s onwards, people have immigrated to Cricklewood from the Indian sub-continent and the Caribbean, though Cricklewood’s first recorded black resident was in fact the pot man at the Crown in the 1830s.

In 1960, Staples Corner alone employed 10,681 people. Yet despite improved road access in the form of a series of unsightly flyovers, Cricklewood’s industry was already in decline. Young black men were by far the worst affected by the mass unemployment that followed.

Homelessness also became a problem and, from about 1984, it became common for homeless men to sleep on Cricklewood Lane. By the 1990s, most jobs were in the service sector or in small workshop-based manufacturing.

Local attempts to cope with change varied. In 1979, the Samuelsons, owners of a firm manufacturing film equipment, founded the Production Village, a television studio and entertainment complex set up in part of the disused Handley Page factory. A number of films were made in Cricklewood, including the first of the Hellraiser horror series. The Production Village has since disappeared. A health club now stands on the site.

The Samuelsons also organised the Cricklewood Society, an organisation that appears to have had a curiously pre-war view of Cricklewood. Other citizens opposed a Tesco superstore. One of the happier achievements of this period was the creation of the Cricklewood Festival.

In the 1990s, Cricklewood was put on the map once again because of the comic books of the writer Alan Coren and the popular BBC television comedy series Goodnight Sweetheart.