Harlesden is in south Brent, south of Willesden, northwest of Kensal Green and southeast of Stonebridge.

Harlesden, originally ‘Herewulf’s Tun’ (‘Herewulf’s Farmstead’), began as a Saxon settlement on an elevated and well-watered woodland clearing. Recent archaeological excavations have found little evidence of the Saxon hamlet, although an unidentified piece of pottery may date back to the 5th or 6th centuries AD.

A charter mentioning Harlesden that supposedly dates from 939 is generally regarded as spurious, but Harlesden is mentioned on a list of sailors on a ship in around 1000.

In the Domesday Book in 1086 (which recorded a survey of land in England and Wales), Harlesden (‘Hervlvestvne’) is listed as a manor that ‘was in the lordship of the Canons of St Paul’s before 1066 and still is’. 22 villagers and 100 pigs were recorded. By 1215, the size of the manor had declined and its other main asset, the lordship of the hamlet of Harlesden, had lapsed by the 16th century.

For 100 years from 1438, a brick and tile factory thrived in Harlesden. In the 16th century, the village of Harlesden had at least seven houses along a green that bordered Harrow Road. One of the houses was the main farmhouse of the estate that All Souls’ College, Oxford, owned by 1474.

Although in the parish of Willesden, Harlesden had a separate identity from quite early on. By 1720, 23 local people were rich enough to pay rates (taxes).

In the 17th century, the Anchor & Cable pub in Harlesden issued trade tokens (used like money, they were widely made and used in response to the lack of low value coins produced officially).

By the mid-18th century, the village had two pubs (then called inns), the Crown (perhaps a renamed Anchor & Cable) and the Green Man. At this time, there were a number of farmhouses set in orchards around the green and more farms to the northwest. A network of roads led to places like Acton and Willesden Green.

When the open fields were enclosed in 1823, there were some 30 houses, several of them described as ‘desirable’. Enclosure was the official act of parliament that enabled farmers to fence off their farms, and seize previously common land in villages.

The beginnings of public transport

By 1834, a number of cottages, built by tradesmen and occupied by the poor, were built around the green. By 1839, the London-Harrow coach passed through Harlesden every day. The village had a blacksmith, a grocer, a shoemaker and a new pub, the Royal Oak (still there today). By 1855, a bus service from the Royal Oak pub to London was up and running. In spite of this, major development only came with the railways.

In 1837, the London & Birmingham Railway (which became the London & North Western Railway [L&NWR] in 1846) was built to the south of the village.

In 1841, there was a short-lived station called Willesden on Acton Lane. There was a story that this station was built so that Captain Huish, manager of the line, could travel into London, but this has been proven false. Willesden Junction Station replaced the station in 1866.

From 1869, the United Land Company bought estates in Harlesden. Cheap houses could be built in Harlesden as, being in Willesden parish, it was not subject to London’s strict planning regulations.

However, this could also cause difficulties. Harlesden ratepayers had to put pressure on Willesden vestry, a largely rural body used to relying on open drains for sanitation, to provide the town with a sewer. Sewers finally arrived in Harlesden in 1871.

By 1876, one writer claimed that Harlesden had been ‘utterly spoiled’. This was not then true, but in the following decades, developers bought up farmland. Some developers built quality housing intended for commuters, others built terraced cottages. In Harley Road, the L&NWR built houses for its own workforce.

By 1894, there was no true open countryside between Harlesden, Church End and Stonebridge Park, although there were still dairy farms in the area.

In 1900, All Souls’ College built Wrottesley Road and began leasing land to builders of middle-class housing. In about 1904, this estate was hit by a slump in house building, and building had stopped completely by 1910. This led the college to allow the building of cheaper houses. Despite this, by 1920, house building was continuous between Harlesden and Kensal Green.

Watch this video showing how Harlesden has changed over time.

The turn of the century was Harlesden’s heyday. The population was mainly middle class and had a strong sense of civic pride.

The town had nine churches and chapels, including the impressive Anglican All Souls’ (1879). There was a Catholic convent in Crown Hill Road from 1886, with an associated Catholic girls’ school from 1888. Catholics from Wembley came to Harlesden to worship during this period.

The famous Jubilee Clock dates from 1888. Originally planned in 1886, it was decided to use it to commemorate Queen Victoria’s Jubilee in 1887. In fact, it was not erected until 1888, but the inscription misleadingly says that it dates from the Jubilee the year before. It was renovated in 1997.

In 1895, the Council turned land near Roundwood House into a park, and it was described as ‘26 of the loveliest acres [a]round London’. The High Street was rebuilt in the Edwardian period and the Willesden Hippodrome, a large music hall, opened in 1907. Several cinemas also opened in Harlesden in this period.

In 1888, Harlesden became the first area in northwest London to have horse-drawn trams. By 1890, there was a horse-drawn bus every five minutes from Paddington to Harlesden and one every 12 minutes from Harlesden to Charing Cross. In 1907, electric trams came to Harlesden, improving an already excellent public transport system.

In 1912, the L&NWR built a new electrified train line, opening Harlesden Station near the site of the old Willesden Station. In 1917, electric trains to Watford began running on this line. 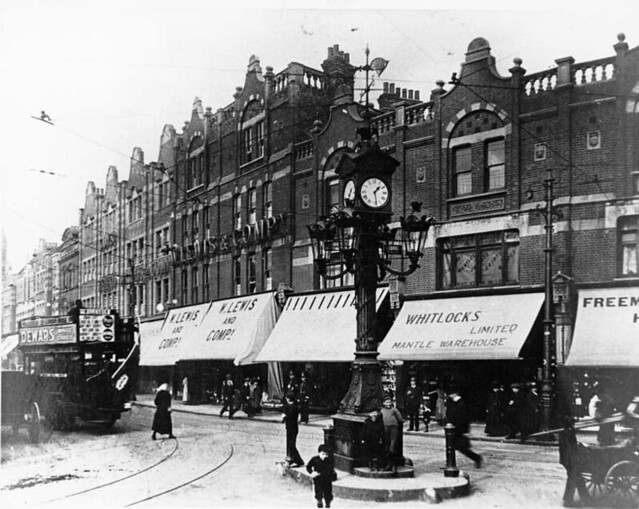 The railway brought industry to Harlesden, with small firms set up factories in the 1880s. By 1890, products such as washing machines, bicycles and antiseptic fluid were being made in Harlesden.

In 1902, McVitie & Price opened their Edinburgh Biscuit factory in Waxlow Road, Harlesden. In 1909, it employed 1,150 people. Eventually, it would be the largest biscuit factory in the western world, employing 2,600 people in 1978. The factory is still in operation today, where they make their ever popular Digestive and Hobnob biscuits. Locals say the air around it smells like biscuits.

By 1919, there were three large factories in Acton Lane. One of these was the North Metropolitan Electric Power Supply Company’s generating station, which began operating (under Council control) in 1903.

At this time, many of the working class population of Harlesden lived in considerable poverty. A report in the Willesden Chronicle newspaper (7th February 1908) mentions the ‘nearness to starvation’ of the poorest residents of Harlesden, Stonebridge and Lower Place.

During the First World War, in 1915, German bombs sunk the British ocean liner Lusitania, killing 1,198 passengers and crew. Following this attack, people in Harlesden rioted in the streets in protest (as well as people in other areas of London, Manchester and Liverpool). Beginning at about 10.30 pm on 12th May 1915 outside a baker’s shop at 269 High Road (owned by Mr Holm), the disorder spread to shopping areas in Cricklewood, Kilburn and Willesden Green. The following evening, several hundred young people smashed shop-fronts in Stonebridge.

By 1939, Willesden Council had demolished the last of the large Victorian houses, Roundwood House and Knowles Tower. In 1949, Harlesden had 3,782 houses and 1,121 flats.

Although the population declined from 39,527 in 1951 to 26,970 in 1971, much of Harlesden remained densely populated. Prefabricated houses for those made homeless by wartime bombing remained on Harlesden Road until the late 1960s. In 1967, the Curzon Crescent estate was the target of vandalism. Redevelopment, including the construction of new flats, did not occur until the 1970s.

In the 1960s, immigration, mainly from the West Indies and the Indian subcontinent, led to racist articles in a national newspaper. This brought a swift response from the people of Harlesden, whose sense of community was clearly still strong.

The demise of south Brent’s manufacturing industries and the growth of out-of-town shopping centres such as Brent Cross hit employment in the area hard. In the mid-1980s, rising property prices did nothing for most local people.

Harlesden has become the centre of Brent’s large Jamaican community, who have had a big impact on local culture, making it the unofficial ‘UK capital of reggae’. Brent has produced key reggae musicians, including Janet Kay and the Cimarons.

In 1968, label Trojan Records opened in Harlesden, and was influential in bringing reggae music to the UK. Antonio ‘Chips’ Richards of Trojan explains: ‘London was the launching pad for the world ... Reggae had a home and Trojan was the mother’.

In 2018, Trojan celebrated its 50th birthday, and its influence is visible today in local rappers, including Nines and Doc Brown, and the spread of hip-hop and grime across London.

In 2020, Brent was awarded the Borough of Culture, meaning it received money to put on community projects throughout the year. One of Brent’s projects was No Bass Like Home, which aimed to shine a light on the UK reggae revolution which began in Harlesden. The project includes a digital archive of interviews with key figures from the reggae movement, photographs, films and memorabilia.

Flick through this album of photos of members of the Windrush Generation in Brent from the Brent Museum and Archives collection:

As of the 2011 census, 67% of the population of Harlesden were from black, Asian and minority ethnic (BAME) background. This compares to 64% in Brent as a whole, 40% in London, and 14% in England and Wales.

There are many growing communities in Brent, including West African, Somali, Brazilian, Portuguese, and Central and Southern European.

Much of the information you have read on this page came from the following resources, some of which are held by Brent Museum and Archives, and available to look at. For more information, contact us by phone 020 8937 3600 or email: museum.archives@brent.gov.uk