History of Neasden and Dudden Hill

Neasden is situated in the middle of Brent. It borders on many other districts in the Borough, including Wembley, Kingsbury, Dollis Hill and Willesden.

The name Neasden means ‘the nose -shaped hill’ in Anglo-Saxon. The original Anglo-Saxon settlement was on a well-drained and well-watered site on the western end of the Dollis Hill ridge. A charter of the Anglo-Saxon King Athelstan mentioning it is now regarded as a forgery, but it is definitely mentioned in a document of about 1000 AD listing men manning a ship. St. Paul's Cathedral owned land at Neasden by this date.

By the middle ages the village comprised a number of small buildings and there was a green near the site of the present roundabout. Land at the eastern end of Dog Lane belonged to Westminster Abbey by 1454. (Image: Neasden house)

Dudden Hill, southeast of Neasden, is named after a Saxon settler called Dodda. It is first mentioned, as "Dodynghill" , in 1544.

Local landowners and life up to the 1870s

During the 15th century the Roberts family became the most important landowners in Neasden. Thomas Roberts erected Neasden House (on the site of the modern Clifford Court) in the reign of Henry VIII. In 1651 Sir William Roberts, an active Parliamentarian, bought confiscated Church lands. After the Restoration the estates went back to the Church, but were leased to the Roberts family.

Sir William improved Neasden House and in 1664 it was one of largest houses in Willesden parish. By this time, however, the Roberts' estate had already begun to shrink because of Sir William's carelessness.

In 1720 eight people in Neasden were rich enough to pay rates. One of them built The Grove, the stables of which are now the Grange Museum of Community History. (Image: A sketch of the blacksmith’s shop on Neasden Lane)

During the 18th century the Nicoll family replaced the Roberts as the dominant family in Neasden. Most of the Nicolls were farmers, but some were moneyers at the Royal Mint. By 1818 the Nicolls wholly owned Neasden House and much of the old Roberts estates. In 1847 John Prout, a lawyer with a degree from Wadham College, Oxford, married Catherine Maria Nicoll. He also bought more property in Neasden. Prout was a fairly unenlightened character who opposed modern sewers on grounds of cost, preferring open ditches.

When enclosure came in 1823 Neasden consisted of six cottages, four large houses or farms, a smithy and a public house, as well as a cottage towards Kingsbury. The Welsh Harp reservoir came in 1835, and breached disastrously six years later.

A Neasden publican is mentioned as early as 1422, probably for serving short measures or brewing beer without a licence. In 1722 there was an inn called the 'Great House', and in 1751 one called the 'Angel'. The 'Angel' probably became the 'Spotted Dog'. The Willesden vestry frequently held parish dinners there. By the 1870s it was a tea-garden attracting crowds from London.

In the early 1850s Neasden had a population of about 110. Most of these were farmers, labourers and servants, but they also

included three lawyers and a stockbroker. In the second half of the 19th century agriculture in the area largely consisted of rearing and pasturing horses, producing hay to feed them, and dairy farming. All of these activities were the result of Neasden's proximity to London.

Railways and the growth of Neasden

Railways at first increased the need for horses, to move goods to stations. The first railway came to Neasden in 1868. In 1875 it opened a station on Dudden Hill Lane, called ‘Dudding Hill, for Willesden & Neasden’. The spelling Neasden, rather than Neasdon, came with the railways. Unfortunately the station was in the middle of nowhere and the railway company was not interested in operating passenger trains on the new line. It had no real effect on development. Nonetheless Neasden had grown to 46 houses by 1876.

In 1880 the Metropolitan Railway extended its line from Willesden Green to Harrow and opened a station on Neasden Lane. The Metropolitan also purchased land to build workshops, engine sheds and labourers' cottages, creating Neasden Village. Situated to the west of Neasden, it was called "the loneliest village in London." (Image: Quainton Street in 1961, with the power station in the distance)

A power station was added in 1903 and the Village grew over the next 25 years. All the streets were named after Metropolitan stations in Buckinghamshire. Unfortunately the land was very damp, which caused problems later, and the power station polluted the air so much that letters about it appeared in ‘The Times’.

Railwaymen worked 12-hour days, for which they were paid 42 shillings for a six day week. Unlike the local farmers, most of them voted Liberal. The Metropolitan Railway Temperance Union provided social facilities. In 1883 an Anglican mission chapel, St. Saviour's, was set up in the Village. Its priest, the Reverend James Mills, became an important and popular figure in late 19th century Neasden. In 1885 Mills took over St. Andrew's, Kingsbury, and became vicar of a new parish, Neasden-cum- Kingsbury, created because of the area's rising population. In 1887 a vicarage was built on the south side of Neasden Lane, between Neasden Village and the modern High Street. Mills' successor was sadly not of the same calibre and complained that instead of gentlemen his parish was teeming with horse dealers and railway workers.

Before Mills' arrival the only sporting facilities available at Neasden had been two packs of foxhounds, both of which had been disbanded by 1857. Mills became founder president of Neasden Cricket Club and encouraged musical societies. Catherine Prout also organised social events. In 1893 a golf club was founded at Neasden House. However only 10% of its members came from Neasden. Most of the members were rich men from London.

In the 1890s change led to a conscious effort to preserve, revive or invent a village atmosphere. At the same time the 'Spotted Dog' became a social centre for local people. A clay pigeon shooting ground also opened north of the vicarage.

In August 1880 there were 30 trains a day each way between Baker Street and Harrow. The journey from Neasden to Baker Street took 20 minutes. The railway stimulated development. Farmland was being sold for building as early as 1882. By 1891 Neasden had a population of 930, half of whom lived at Neasden Village. Despite the presence of the Village in the west, it was the London end of Neasden that grew fastest, especially Dudden Hill.

The Dudden Hill estate was planned as early as 1899. It was to consist of a grid of 14 roads with names starting with the first 14 letters of the alphabet, excluding 'J'. The area was largely built up by 1911, when the Dudding Hill Estate Association was founded.

Dudding Hill was regarded as the more genteel spelling of the name. The district got a Metropolitan station in 1909, misleadingly called Dollis Hill. (Image: Neasden Station, photographed before 1910)

Neasden's population rose from 1,040 in 1901 to 2,074 in 1911. The concentration of population at the London end led to the parish's new church, St. Catherine's, being erected near the 'Spotted Dog'. In 1916 this temporary iron structure was replaced by a permanent church at the junction of Dollis Hill and Dudding Hill lanes.

In the extreme southwest development did not really begin until the turn of the century. The area was so isolated that a sewage farm opened here in 1886, followed by a fever hospital in 1894. In 1893 the Great Central Railway got permission to join up its main line from Nottingham with the Metropolitan. Trains ran on or alongside the Metropolitan track to a terminus at Marylebone. The Great Central set up a depot south of the line at Neasden and built houses for its workers (Gresham and Woodheyes roads).

The Great Central village was “a singularly isolated and self- contained community" with its own school and only one shop, Branch No. 1 of the North West London Co -operative Society. Today it is part of a conservation area. Residents had to walk long distances to reach buses, trams and even, ironically, trains. The ‘aristocracy’ of this community were the drivers of the Manchester expresses, many of them non -conformist northerners. There was considerable sporting rivalry between the two railway estates, with a football match every Good Friday. By the 1930s the two railways employed over 1,000 men, while other industry in south Neasden employed over 2,000 more.

Apart from the railways, Neasden was dominated by agriculture until just before the First World War. By 1913 light industry at Church End had spread up Neasden Lane as far as the Metropolitan station. The North Circular Road, opened in 1922 -3, brought more industry. By 1933 British Thomson Houston Co., the Neasden Waxed Paper Co. and the Oxford University Press were employing well over 2,000 people between them. An industrial area also developed at Coombe Road.

The 1924-5 British Empire Exhibition led to road improvements and the introduction of new bus services. Together with the new North Circular, it paved the way for a new residential suburb at Neasden. In 1930 Neasden House was part demolished and part converted into flats. In 1928 Braintcroft School was opened on Warren Road to serve the growing population in the northeast. The golf course began being built over in 1929. A year later Wykeham School opened in Aboyne Road, and in 1931 a fine if rather out-of-the-way public library was built with a reading platform overlooking the Welsh Harp.

By 1949 Neasden had a population of 13,808 people. In many people’s eyes it was the typical suburb, provoking criticism from John Betjeman and, later, the satirical magazine ‘Private Eye’, which was printed nearby. But Neasden was never a classic suburb, because of its very industrialised south. After the war some flats were built, but there was little space left for development. In 1961 a 13-storey office block called Radiation House was built by the North Circular in southern Neasden.

Traffic on the North Circular and Neasden Lane became an increasing problem in the post war years. Eventually, despite spirited resistance from local people, the Ministry of Transport enlarged the North Circular and diverted traffic on Neasden Lane to an underpass. This project, which involved the demolition of numerous houses, was completed in 1973. It solved traffic problems at the North Circular/Neasden Lane intersection, but Neasden shopping centre, already effectively cut in two by the North Circular, was now also totally separated from its southern hinterland, which from 1982 was served by a new Tesco’s superstore. At the same time the creation of the out-of-town shopping centre at Brent Cross encouraged buses to by-pass Neasden. The only good thing to come from the new road system was the Grange Museum of Community History, which opened inside the roundabout in 1976. (Image: A group of young men campaigning against satirical attacks on Neasden by Private Eye and others, around 1970)

The high street threatened to become a ghost town, while industrial decline also hit the area hard. The 1976-8 Grunwick dispute, a bitter strike involving Asian women workers with long- standing grievances, further proved that Neasden was hardly a classic middle class suburb, as did the punk clientele of the 'Spotted Dog' in the same period.

Neasden has however survived, partly because of pressure on London Transport to improve bus services and partly because of recent immigration to the area. Irish people coming from Kilburn or Cricklewood have opened several pubs on the high street, while Asian immigrants have kept small shops alive and built the BAPS Shri Swaminayaran Mandir, an impressive Hindu temple that opened in 1995.

Flick through this album of photos of the Neasden Subway Murals from the Brent Museum and Archives collection: 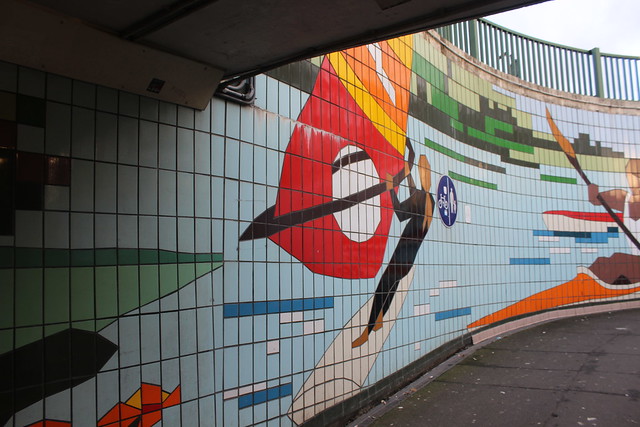 Find out more about this area by looking at our local history articles, written by volunteer researchers and members of local history societies: